The need for training a sufficient number of nurses can hardly be overemphasised. One of the chief objects of the Seva Pratishthanb has been to provide facilities for training in nursing and midwifery in a suitable atmosphere.

This institution had been training midwives since its inception in 1932 and it was recognised as a training centre for Junior and Senior Midwives in 1944. When the institution was expanded into a General Hospital in 1956, the school was recognised for the training of Auxiliary Nurse-Midwives, later known as Multipurpose Health Workers, and in the following year for General Nurse-Midwives as well. The school has the capacity for training about 150 students. The State Government has been helping the School regularly and is bearing a portion of the cost of training of about 100 General Nurse-Midwives.

General Nursing-Midwifery Course : Candidates seeking admission to this course must have passed the Higher Secondary Examination or its equivalent and must not be under 18 years or above 27 years of age. The session normally starts in September and the course lasts for three years. Pupils are selected for the course after a written test, an interview and a medical check up. The roll strength of students as on 31st March 2021 was 116. After a course of instruction for three months, an examination is held and successful candidates take part in an impressive ceremony called Capping Ceremony at which they are given the Nursing Cap, a symbol of Nursing Service. At this ceremony they take vows, composed in lucid Sanskrit, of life-long dedicated service to the sick and suffering 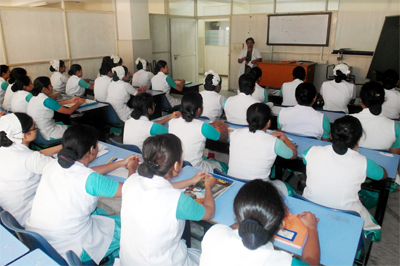 School of Nursing- ClassroomThe school has a well-equipped demonstration room, a library with 7850 books and 6 Nos. of periodicals, an auditorium and a shrine and prayer hall. Pupils receive training in an atmosphere conducive to their all round development - physical, intellectual, moral and spiritual.

A regular programme of in-service training for qualified nurses is conducted by the institution to improve and maintain a high standard to prepare them for higher courses. The nursing tutors and other members of the nursing staff are also encouraged to acquire higher professional qualifications.

Among the other cultural and religious functions held during the year under review were, Saraswati Puja, Christmas Eve, Independence Day, Republic Day and World Nurses’ Day. These were celebrated with great aplomb, with impressive parades and folk dances, tableaus and patriotic songs as befitting the different occasions.